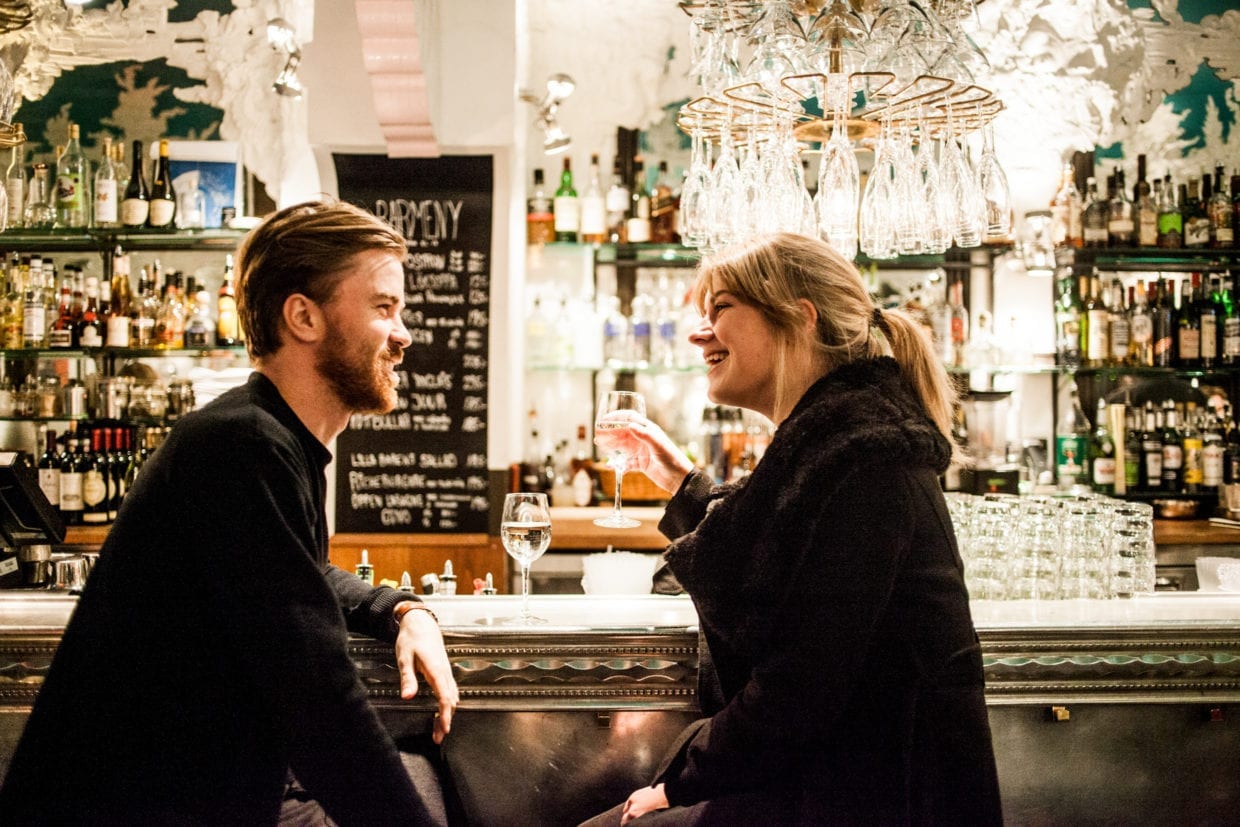 Swedes live in a culture, where, before marriage or even sexual intercourse, the two prospects ideally conduct certain interactions in order to display and assess one another's mate- or date-ability. This process is internationally know as flirting. And here is how the Swedes do it.

Ways of how Swedes flirt can be various. To increase the chance of being able to observe flirting Swedes, one should to go to a Swedish party, pub or night club. Basically meaning, any occasion where Swedes are likely to get drunk. The preferred occasion for many Swedes, when it comes to flirting, is definitely “tipsy-time”.

Going to Sweden soon?
Read “How to be Swedish – A Quick Guide to Swedishness – in 55 Steps”, now on Amazon

Of course, Swedes can flirt also during the day, at work or in the supermarket. But it is rather rare, and if it happens it is hardly noticeable for the foreigners' eyes.

Daytime flirting in Sweden can be spotted when you hear one of the flirting individuals, who just met, finish the conversation with “Vi kanske kan ses över en fika någon gång?“, “Maybe we can meet for a coffee some time?”

There are several scenarios of Swedish flirting to remember, in case you find yourself getting approached by or hit on by a Swede.

Starting at the preparty. As we learned in the post Party like a Swede, Swedes like to meet up before they go out to the pub or night club. This is very convenient if you want to make new friends or meet your future love. Cultural rule: as you enter the preparty you introduce yourself to every(!) person with a handshake. A great opportunity to preselect a potential pursuit for later at the pub. Having spent a few hours at the preparty together, getting drunk, makes it so much easier to approach that special someone on the dance floor. Therefore preparties are considered a great way to minimize potential rejection.

At the pub, the whole group rarely dances or drinks alltogether. Gathering in smaller groups is more common. A great opportunity for you to continue that lively conversation with that sweet Swedish girl/guy about cultural differences, back when you were standing in the kitchen of the preparty host. Now, at the bar, while waiting to order the next shot or cider you have a great chance to go into depth. But don't just talk, you not only should show your skills on a verbal level, but also your physical vitality, on the dancefloor. No you don't have to be great at couple dancing. And actually, you don't have to be great at any dancing at all. It's enough if you move your head rhythmically back and forth when you dance to the beat of Avicii's “Levels” or wave your hands in the air at the right moment of Håkan Hellström's “Det Kommer Aldrig Va Över För Mig”.

Time to get closer.

At the actual party

In the meantime, you might notice Swedes using their phone regularly and extensively. Sending “snaps” (the images, not the drinks) and text messages to their friends in the beginning of the evening. Then, later, Swedes who have the intention to get cozy with someone they already have gotten to know at previous occasions, reach out to check for a night together. “KK” is how these relations with a focus on intimate interests are called by Swedes – standing for “knullkompis”, “f*ck buddy”.  The most common text message sent in Sweden on a Friday/Saturday night between 23.00 – 03.00 in Sweden is most likely “Ses ikväll?” or, to start the request with a little bit more romantic grace, “Hur är det med dig?“, “How are you doing?”.

If nothing worked, “Kvart i två ragg“

In case the pub is about to close and you're still standing with a bored friend and a half empty bottle of beer on the side of the dance floor, make a few steps forward!

Hope for a “kvart i två ragg“, “kvarter to two flirt/hook up” – out of desperation since you haven’t been lucky so far and your KK hasn't replied yet. Face it, you’re drunk, can hardly say a complete sentence or eeven walk straight anymore. Never mind all the other “evening leftovers” are exactly in the same condition. So make sure to get close to one of them as long as the music is playing (no need to talk then) and the bright lights are still off (easier not to reveal your drunk facial expressions). While standing in the diffuse light, you might notice someone coming up to you to perform a dance-like move to catch your attention or just bump into your behind with their behind from behind. That's about it, before you can react you might find yourself kissing the person in the middle of an emptying dance floor. You probably just scored a person that you previously commented on as “funkar i krig“, “is ok during war time”. Spontaneously deciding not to keep your eyes closed while kissing, in favor of not loosing the balance, you put a lot of focus on actually hitting your short-term partner's lips or tilt your head to remove their wet tongue from penetrating your ear. As one of you reaches the belt of the other it's probably time to join the queue to the wardrobe and find a place somewhere else to continue the exchange of Billy's pizza and passion.

If you are fed up with nightly encounters and sexual adventures, and instead aim for a deeper long term relationship, ask for a söndagspromenad, sunday stroll. This means, you have an actual interest in the person. Combined it with a fika, several times, means serious business. That's how long term relationship-material is tested in Sweden.

If you invite a Swede over to your place for a fika, as the first date, that person will assume that you probably want sex. That person will be 100% sure you want sex, if you invite him or her over for a movie. “Ska vi kolla på en film tillsammans?“, “Shall we watch a movie together?”, is so overused in situations where someone wants to explore someone else's body that it isn't taken serious any longer. Sorry for you, if you really just want to watch a movie with someone. It's simply not possible to express an invitation without creating wrong expectations. “Men jag vill verkligen bara titta på en film, inget annat!” “But I really just want to watch a movie, nothing else!” – Yeah, of coooourse…

Several female friends confirmed: Swedish men like to flirt. Many are not very good at it. But they like it. Swedish mens’ flirting cues are a bit more subtle than in other countries. For example, they won’t stare at you or even try to say more than three sentences. Basically you can divide male Swedish flirting activities into two categories:

So, if you're a man, get used to a comparably aggressive flirting behavior of Swedish girls.

If you're a woman and you had to be afraid of being called a slut whenever you flirted with more than one man within 30 minutes, back in your old country, good news: Welcome to Sweden, where you're free to approach the guy you fancy and increase your mating frequency – without being judged as “loose”. You're just a sexually liberated woman. No need to feel shame over satisfying your natural needs and desires. Whatever those might be.

So, welcome to Swedish dating and mating life. You will love it! Unless… well, just ask your non-Swedish spouse. ;)

More about Swedish culture in my book: “How to be Swedish – A Quick Guide to Swedishness – in 55 Steps”,