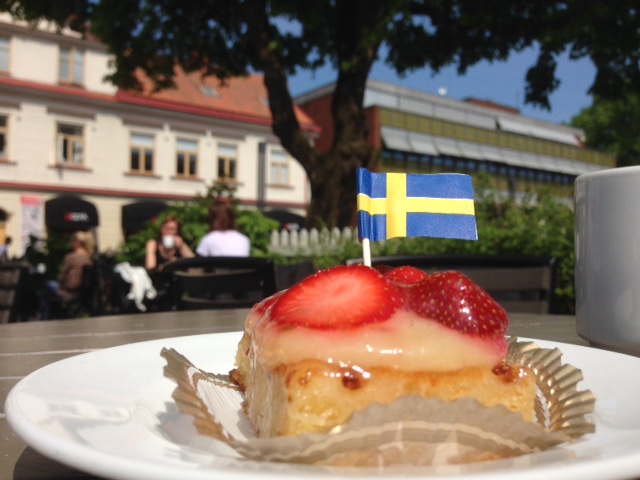 Swedes are nice people. They don’t steal from other’s. Instead they even like to pay high taxes for a more healthy society.

And, in fact, Sweden offers a high quality of life: reasonably high wages, relatively low unemployment, a low rate of crime, high gender equality and high level of sustainability. No need to mention free schools and universities, good healthcare, 25 days off from work each year and not to forget 200 years without war. Can it get more peaceful than that?

Even the technical infrastructure is highly advanced, with fast internet. Also, many Swedes have the latest mobile phones and computers – and they actually know how to apply them.

All this makes them very proud of their country. They might not show it directly to visitors or new-Swedes, but behind closed doors they show their conviction that they live in the best country in the world.

To celebrate their beloved country Swedes like to hoist their flag. But they not only hoist their flag on poles, they put them everywhere: on napkins, birthday cards, graduation cards, toothpicks etc.

Isn't it nice, the Swedish flag? Ok, it's not really fancy. A yellow cross on blue ground. But doesn't it look friendly and welcoming? I mean, if y0u look up to the heaven, on a sunny day, you will see exact those colors.

Where does the Swedish flag come from? Well, one might assume that many years ago, the Scandinavian countries met for a flag brainstorming. Then they said, let's all have the same pattern, but with different colors.

But of course, that is not the real answer. Originally the Swedish flag is based on the first flag that represented a country, the Danish flag. The colors, blue and yellow, stem from the Wasa dynasty, in the 16th century.

On these days you can expect to see the Swedish flag on all poles country wide.

So, dear new-Swede, hoist the Swedish flag, and enjoy it's color-matching with the heaven and the sun.