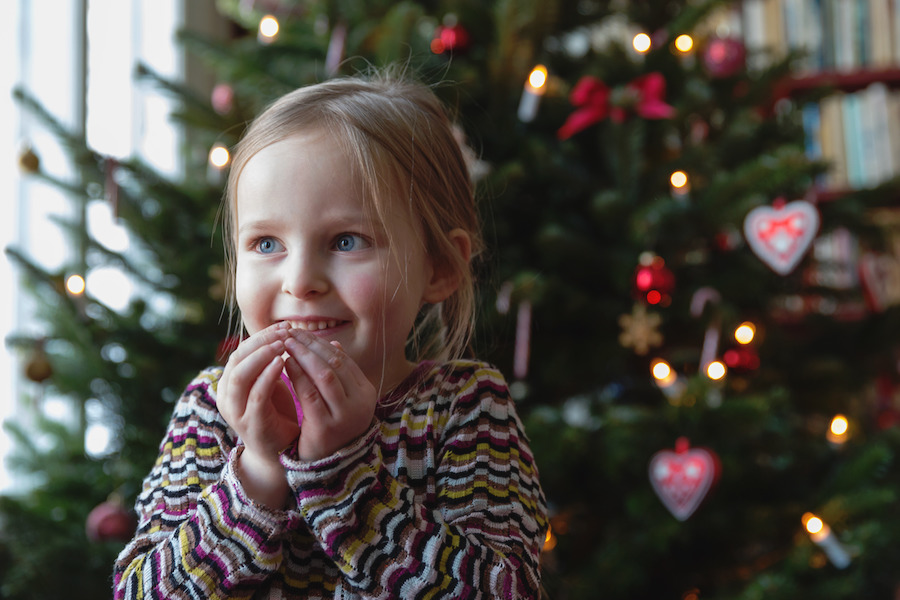 Swedish Christmas in a nutshell

How to say merry Christmas in Swedish

If you're in Sweden during the Christmas season you can wish someone who you're not going to meet before Christmas again, a “God jul”

Christmas in Sweden is just like Christmas in your old country. Except, there are a few things that might be a little different …

On the 10th of December you can watch Swedes lining up in front of churches to watch girls wearing white robes, singing, while holding candles in their hands. One girl is wearing the crown with candles on her head. She plays Santa Lucia, the Italian saint of light. Many young girls wish to be Santa Lucia one day, until they find out it can take some time to remove the dripping wax from the hair and scalp.

You drink a mulled wine with fragrant spices called Glögg, to which you first add almond slices and raisins, which you later fish for with a little spoon and lots of patience.

You celebrate Christmas on Christmas eve, the 24th of December.

You eat Swedish Christmas food: for once you don't just have another smörgåsbord, no, that would be a little boring after having had one for påsk, midsommar and the kräftskiva already. Now you have a julbord (christmas table) instead. And, as you can imagine, it's contains exactly the same ingredients as a normal smörgåsbord, except you put some glögg and candles on the table as well.

After the first round of heavy eating you gather with the other family members in front of the TV to watch Kalle Anka (Swedish for Donald Duck). Yes, all grown ups watch Kalle Anka, too, not just the children. And they watch it every year. Don't expect a TV broadcast of new episodes every year. No, they show the same collection of clips from the previous years. After a couple of years in Sweden you will know every line or sound Mickey Mouse and Långben (Goofy) say to each other on their hilarious camper-journey through the mountains. Whether you like it or not.

While watching TV you'll probably also have a plate covered with cookies standing in front of you on the living room table. Those cookies are very likely in the shape of a blossom or heart, called pepparkakor, ginger bread. Pepparkakor have been popular in Sweden since the 14th century. Wow.
As a new-Swedes you should get excited over a pepparkaka that breaks into exactly three pieces when you push it with one finger into your other hand's palm. It's said this brings you luck.

If you didn't find yourself lucky with the pepparkakor, wait for another Swedish Christmas tradition: Swedes put an almond into the risgrynsgröt (rice pudding). According to tradition, the one who gets it served is said to either marry next year or simply have luck. One option doesn't always necessarily exclude the other.

Have you been in Sweden during the Christmas season? How did you like it? What was maybe a bit weird? Please leave your comment below!