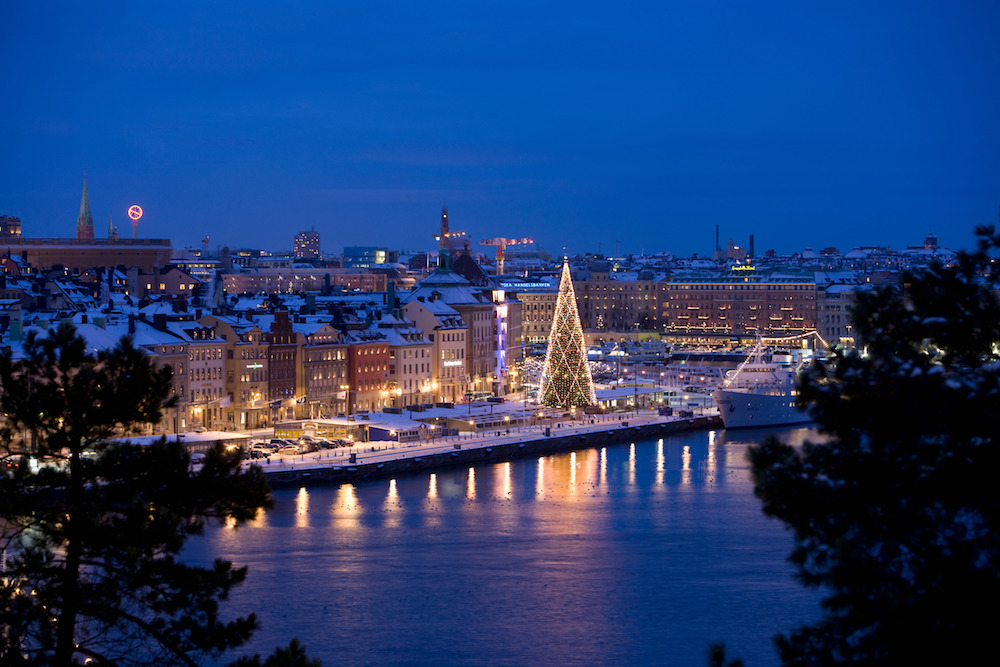 When people in Sweden celebrate the birthday of baby jesus they might do that a little different from what you might expect. How does a typical Christmas in Sweden look like? Below you find out more about Swedish Christmas traditions and food.

But let's start with how to say “Merry Christmas!” in Swedish: “God jul!”
And this is how to pronounce it correctly: “Goo juhl!”

The Swedish Christmas season usually begins some time in October. You are then able to spot the arrival of typical Christmas decoration, candy and chocolate calendars in supermarkets all over Sweden.

As you might have heard before, it’s cold in Sweden during winter days. Even in the warmer south you can expect degrees around the freezing point. Further in the north you’re guaranteed to have a white christmas and very little daylight.
To some Swedes this sounds romantic. A great opportunity to sit inside in a sofa, covered with a cozy blanket holding a warm cup of tea, eating christmas pastry, like pepparkakor, gingerbread.
Some Swedes just hate the cold and darkness and can’t wait for their New Year’s trip to Thailand.

A typical Christmas eve in Sweden

What to watch on TV in Sweden on Christmas eve?
In Sweden, that’s not even a question. The question is, when will daddy or daughter take their phones out to update their status telling their friends they are currently watching Kalle Anka (the Swedish name for Donald Duck).
I guess I don’t even exaggerate when I say that all Swedes watch Kalle Anka on Christmas eve, altogether. It seems like it gives the whole nation a feeling of being part of something big, of being united. Every Swede older than 10 thinks it’s a little childish to watch the same episode of a cartoon over and over again, year after year. And yet, Swedes love watching Musse Pigg (Mickey Mouse) in his mobile home driving down a mountain road and Chip'n'Chap collecting nuts for the winter. Swedes joke about this tradition, but in the end they laugh about being a part of a nationwide Christmas joke.

Almost all Swedish living rooms are decorated with a christmas tree. This tree is usually bought on the parking lot outside a supermarket – or illegally taken from the nearby woods.
This is probably the main reasons so many Swedes drive a Volvo kombi (station wagon) with a lots of trunk space.

When will I get my Christmas presents in Sweden?

On Christmas eve, the 24th of December and not on the morning of the 25th. Good for kids with little patience.

Until afternoon of the 24th most shops and supermarkets are still open. The day after, on Christmas day as well as the 26th, most shops – apart from the supermarkets – are closed. This is mainly to make sure you spend your time with your family and not in some H&M dressing room, trying to find your way in a too tight dress you consider wearing for New Year’s eve. There’s still time for that a few days before New Years eve. And anyways, it’s probably a good idea to wait with this purchase until your Christmas extra pounds have arrived at their predestined areas of your body.

What should you (not) give as a present?

If you really have no idea what to buy for your loved ones, Swedish society came up with a great solution: “årets julklapp“, the Christmas present of the year. This can be anything from a spikmatta (spike mat) to a surfplatta (tablet computer).
If you receive the årets julklapp from someone, be sure to remember who it was and go for revenge next year.

Julbord, the “Christmas table”. It’s basically a smörgåsbord with typical Swedish food on it. The basic add ons are bread, cheese, butter, potatoes, ham, meat balls, salmon and herring. This doesn’t sound too speical, does it? You’re right. Because this combination is roughly also what you can expect on a Swedish dinner table at Eastern or Midsummer, except, … no wait, there is no “except”, it’s exactly the same every time you celebrate something in Sweden. (Wonder why Swedes haven’t come up with the words midsommarbord and påskbord yet.)

What to drink on Christmas?

Glögg is probably the most common Swedish Christmas drink. You can find it in any supermarket (there with only a few percent alcohol) or in the state owned alcohol store Systembolaget (if you want to go for the proper version with around 10% of alcohol). Glögg tastes like sweet wine. Swedes heat it up in the micro oven or in a pot, then add almonds and raisins to it which are later fished out with a little spoon.

Julmust is what Swedish children like to drink during Christmas. Tastes a bit like cola but a bit more “too sweet”.

More about alcohol in Sweden

Now you should be a bit more prepared for a traditional Swedish Christmas celebration. So get your herring, salmon and knäckebröd on the table, add some potatoes, cheese and meaty things, fill your glasses with glögg and watch an episode of Kalle Anka. Do you feel more Swedish already?

Have you considered celebrating Christmas in Sweden in wooden house at the lake or maybe in a classy hotel? Book your trip to Sweden here!