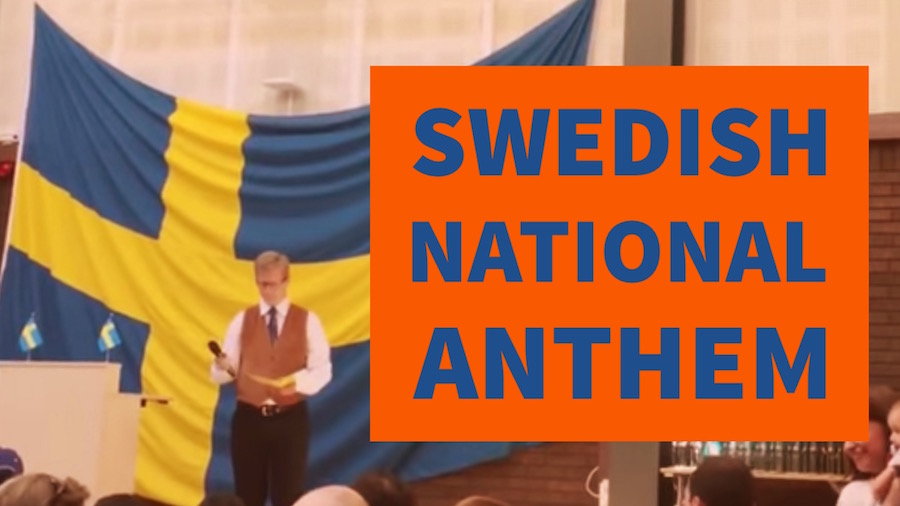 The Swedish national anthem – called “Sveriges nationalsång” in Sweden – is not only sung at sportevents like the Olympic games or games of the national football team. Swedes have a special relationship with their national anthem. They even sing it during private motto-parties and festivities, called sittnings, and, of course, on midsummer.

You can listen to the Swedish national anthem while reading (or singing) the original lyrics in Swedish and below in English.

Recorded during the “Welcoming ceremony” for Swedes who received their Swedish citizenship in the previous year, held on the 6th of June 2016 (Sweden's national day), in Växjö, Sweden.

Thou ancient, Thou free, Thou mountainous north
Thou quiet, Thou joyful [and] fair!
I greet thee, loveliest land upon earth,
Thy sun, Thy sky, Thy climes green.

Thou thronest on memories of great olden days,
When honoured Thy name flew across the earth,
I know that Thou art and wilt remain what thou werest,
Yes, I want to live, I want to die in the North.

Swedes don't mind and love to sing their national anthem whenever possible, loud and full of pride.

A few years ago, Volvo released an advertisement campaign starring Swedish football legend  Zlatan Ibrahimovic. In the video you can hear him singing (or rather saying) the Swedish national anthem – with a slight change in the end: instead of saying Jag vill dö i Norden, I want to die in the North, he says Jag vill dö i Sverige, I wan to die in Sweden.