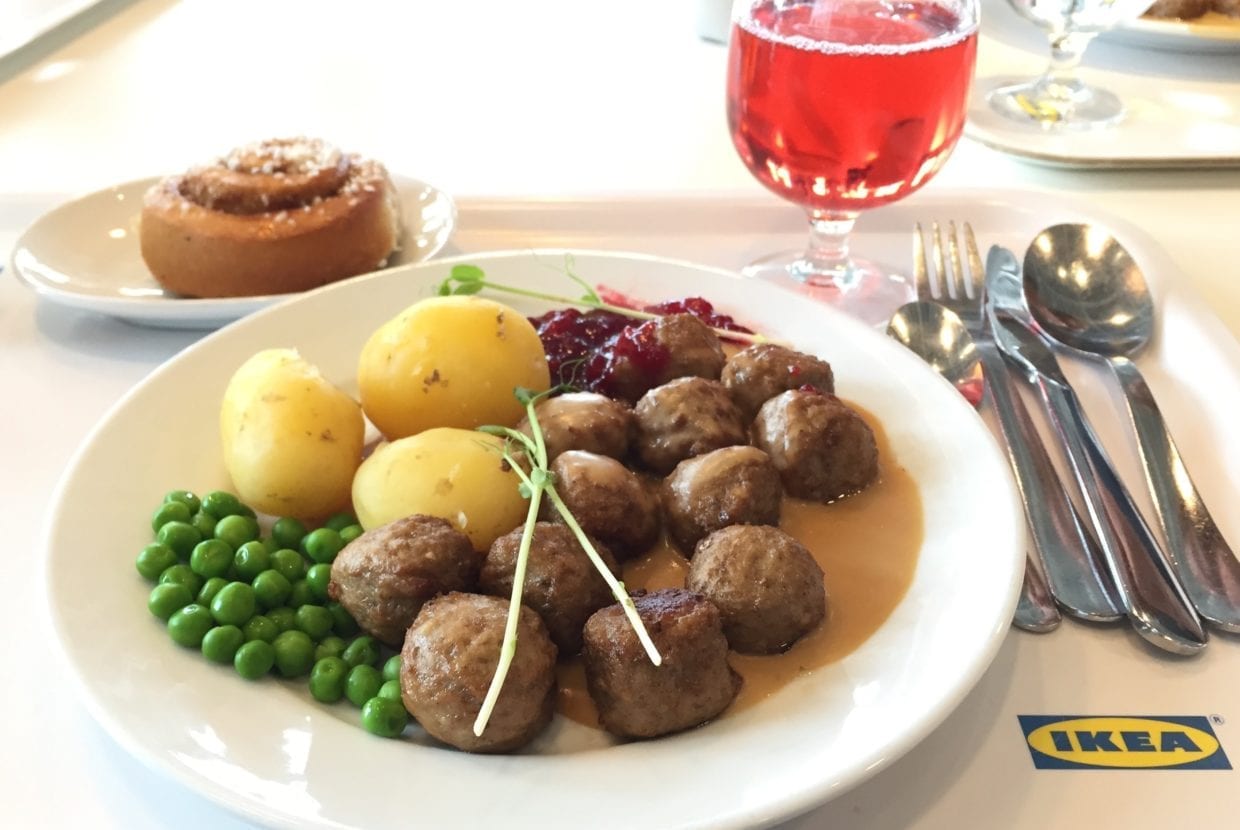 There is some traditional food in Sweden you should definitely try, because it's really delicious. Then there is Swedish food which is rather disgusting, but you should try, because you might want to join the conversation about how bad it really is (like surströmming, see below).

Here are a few much common dishes you might get served in a restaurant if you ask for something typically Swedish.

Meaning “small pieces i pan”. Those small pieces little cubes of potatoes, onions and any kind of chopped meat, which is fried in a pan together with egg or pickled beetroot. It was originally made as a dish with leftovers.

The first time some Swede told me they are going to eat smögåstårta as a main dish, I only was a bit surprised, because I expected to have to eat a sweet cake. What I instead received was a cold cake made of several layers of white or light rye bread with creamy fillings in between. The base usually is mayonnaise and eggs. Add some shrimps, ham, cucumbers, tomatoes and on top sliced lemons and you'll have a classic looking smörgåstårta to serve for your next birthday in Sweden.

But, of course, as a real Swede, you'll not only eat typically Swedish food but also delicacies from other countries as well. Preferably pizza, fries, kebab (sometimes even a combination of the afore mentioned), Asian food and of course hamburgers.

You can find it in almost every café, gas station or supermarket. Either in a baguette or on a slice of bread. A great way to have a snack or replace a full meal when you are just not that hungry.

When you meet a Swedes meet for a fika (coffee break), you will probably find yourself eating one of the following pastries:

Swedes are so obsessed with them, they even celebrate it's existence every year on the 4th October.

Its main ingredients are oatmeal, sugar, coffee, cocoa and butter. You might want to as a fellow Swede how they have been commonly called several years ago… a name that is now seen as politically incorrect.

Green marzipan on a small cylindrical pastry, the ends covered with chocolate.

Food (almost) all Swedes have in their kitchen cabinet or fridge

Of course you have heard about Swedish hard bread. You maybe even have a package of slice of knäckebröd in your kitchen cabinet. Swedes love it. 85% of Swedes have knäckebröd at home.
In the old days it was very important to store food for some time. Which is why a lot of food has been dried or smoked. Swedes have a long tradition of making hard bread. To become Swedish you have to learn to appreciate this crumbling bread and accept the pain of a cut open roof of the mouth and plenty of crumbs spread around your table and kitchen floor.

Swedes eat a lot of salty stuff. Butter is one of the things they like salty. You can buy osaltat smör, unsalted butter, but most Swedes use the salted one to spread on their bread with their smörkniv, butter knife.

Yes it's caviar but far not as fancy as it might sound. Classic Kalles Kaviar, is just a mix of cod or pollock spawn blended with sugar, salt, potato flakes and tomato puree.
The blond kid on the tube is the son of the managing director at the time of the product launch, back in 1954.
Abba, the food brand, exists longer than ABBA the band. Which is why the band had to ask the food brand for permission to use their name. Abba the company replied the request with a note, saying “Good luck!” together with a box of Abba tinned tuna.

The sun is shining in Sweden and you go for a walk during summer, in the afternoon, around your quarter. As long as there at least a few square meters of gras or a terrace, you can expect to experience some smell of grilled meat sweetening the air in your area.
Swedes take their BBQ very seriously. Usually it’s also connected to further typical behavior, as drinking beer or cider, or for the real connoisseur: wine out of a bag-in-box. One activity that Swedes love to play is Kubb (learn more about the outdoor game Kubb, here).

It's basically fermented hering from the baltic sea. If you ever consider opening a can of it, only do it outdoors, because the horrible smell is so intense and persistent.

Tip from a Swede: Open the can in a bucket of water

This is how smell-sensitive dogs react to this smelly fish from Sweden:

Smaklig måltid! – Have a nice meal!