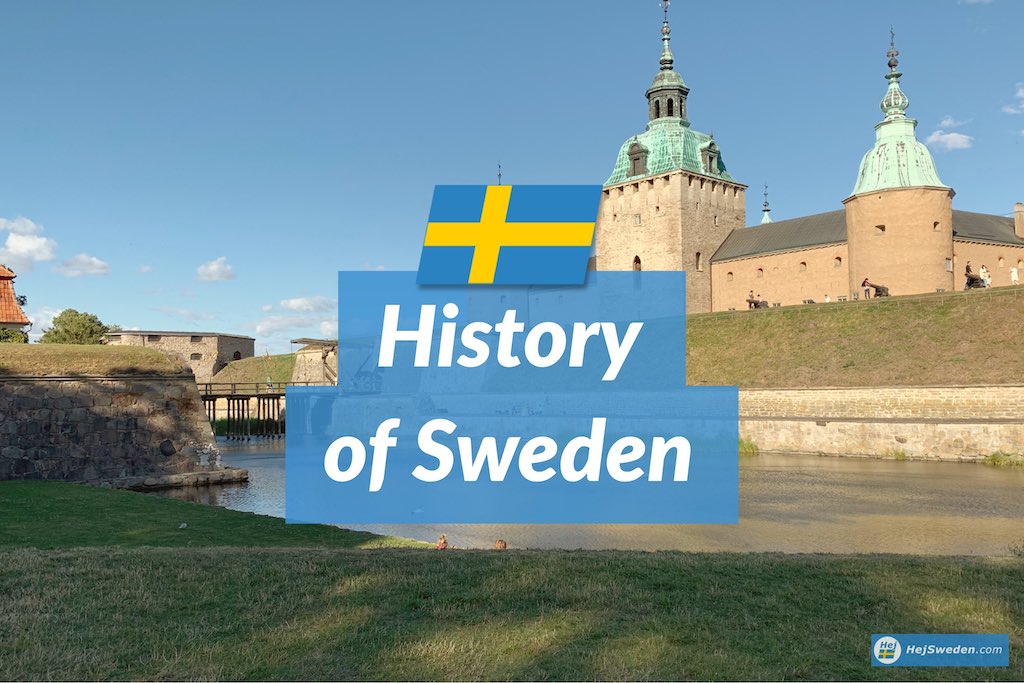 All you really need to know about Swedish history.

Sweden is an old country. It has been around for many centuries. Just like in many other nations, interesting events happened in Sweden's past. Events that had a lasting impact on Sweden's present.

If you find history lessons a bit boring and don't want to read a whole book or Wikipedia page about Swedish history, here is a short list with the most important events of the history of Sweden.

In the bottom of this page, you will find the top three “must know” take-away facts you should remember whenever you want to impress a Swede in a conversation about their country.

Vikings had their glory days in the time between 800-1050. They loved going on a cruise with their flat boats (advanced for their time) and checked in at other coastal towns without previous announcement and took anything they fancied: food, jewellery for their women at home, and blondes for themselves. In exchange they left chaos, humiliation and flat-pack furniture.
More about Swedish vikings.

In 1164 Sweden, at that time it was known as Svea rike (kingdom of the Svea), was recognised as a catholic archbishopric with the seat in Uppsala (Old Uppsala). So, that's when the name Svea rike (today Sverige for Sweden) was officially named for the first time.

Second half of 13th century, Finland

Finland became a part of Sweden. Because Swedes wanted it to be this way. Finns not that much. Weapons, impressive boats and a Viking-like fighting spirit on the side of the Swedes might have contributed to convince the Finns to accept their defeat.

The nations Denmark, Norway, Sweden were united during the Kalmar union. Kalmar is nice. Cozy. Worth visiting. (Find more Swedish towns worth visiting in my Sweden Travel Guide.) In order to live in a union that was considered calm they wanted a calm town to sign their contracts at. They found a town called “Calm”, but for some decision makers this wasn't calm enough. So they went to the town “Calmer” in modern writing: Kalmar.
(People who live in Kalmar despise me for making this silly joke.)

The Danish king got a bit cocky during the Kalmar union. So, Swedish Aristocrats revolted against the Danes. Then, Danes killed them on stortorget, the central marketplace in Stockholm, at Stockholm bloodbath.
This event made many Swedes very upset, in particular this man …

1523: A guy called Gustav Vasa (who probably wished he had, but didn't have any connection to the hard bread producer Wasa) did three things pretty well:

He is also considered modern Sweden's founding father. Cool dude. Everyone in Sweden seems to like him. You can find a massive statue of his in the Nordic Museum (Nordiska museet) in Stockholm.

He died in 1560.
(A fact you will probably have forgotten by the time you reach the end of this page.)

Gustaf Adolf the Second, was kind of a battle hero. Most of his time he spent in wars with neighbouring countries, conquering them efficiently. Which lead to Sweden considering themselves as a “stormakt“, great power, during his time of reign. Countries he conquered (fully or partially) – have a look at the map below:

Gustaf Adolf died in the battle “Slaget vid Lützen” in Germany (which back then wasn't called Germany, yet), where he got shot.

He also had a daughter: Kristina. Kristina was a little special …

Kristina was a bit of a rebel. She didn't engage too much in war making, instead she turned catholic and moved to Rome, then she decided to not be queen anymore and only dedicated her time to catholic ideas. If there already were reality TV shows back then, she certainly would have been predestined to become one of the biggest stars.

Denmark hands some parts of modern day Sweden to the Swedes: the provinces Skåne (Scania), Blekinge, Halland, Bohuslän, in an act called Freden i Roskilde. Some of the Scanian inhabitants, until this day, consider themselves partly-Danish. Jokingly they say they will dig a ditch in order to detach their land from Sweden and rejoin Denmark. This digging has undergone several centuries and is expected to last at least a couple more. No need to pay another bridge passing fee anytime soon.

1766: Introduction of the Swedish Freedom of the Press Act

As the first country in the world, Sweden introduces the freedom of the press act. Until today you can write anything you want as long as it isn't …

… defamation and insulting language and behaviour. If, for example, someone writes something that may be considered to be agitation against a population group, such as racist comments, or publishes images with elements of sexual violence, this may be regarded as a violation of the Freedom of the Press Act.

More about the current Swedish constitution.

As mentioned before Sweden “owned” Finland for a while. Then the Russians took it from them in the Finnish war. Sweden didn't really like it. In fact, they hated it. They thought to themselves “War sucks!” and took the decision to not have any wars anymore, ever.

You probably heard the saying before “Suppose They Gave a War and Nobody Came“, didn't you? Well, that's exactly what Sweden does. “It's war (somewhere in the world), but we better not get involved too much.”
More about conflict avoidance and other Swedish stereotypes.

At one point in history, Swedes ran out of kings. Not good for a kingdom. So they started a casting which surprisingly was won by a French dude (one of Napoleon's most capable officers) who went by the last name of Bernadotte. He became king in 1818. Since then, the Swedish royal family is called “the Bernadottes“, more classy than Nilsson or Pettersson, isn't it?
Old name: Jean Bernadotte
New Name: Karl XIV Johan
More about the members of the Swedish royal family and what Swedes think about them.

At that time, Sweden was a poor country with poor people. Farming in Sweden was difficult, particularly in the region of Småland due to large stones in the fields. Farmers heard about cheap land in the USA. Many of them emigrated. Particularly to the area around Minnesota. Author Vilhelm Moberg wrote a novel about this time in the series The Emigrants. To learn more about this, next time you travel to Växjö in Småland you should visit the museum Swedish Emigrant Institute.

Although there were no direct military involvements in the form of combat, Sweden contributed to Germany's production by the delivery of raw materials and other industrial products. When tides turned, Sweden supported the allied forces instead. Leading to no bombed cities or heavy casualties for more than 200 years.

Although regularly discussed, Sweden is not a member of the Nato. (Yet Nato-friendly.)
More basic facts about Sweden.

The assassination of the popular Swedish prime minister Olof Palme, February 28, 1986, on Sveavägen in Stockholm, remains a mystery to this day. The murderer has never been found but the police came forward with a “potential(!) suspect” (being the “Scandiamannen“, Scandia man), in 2020, and rested further investigation. Since nothing has been fully confirmed yet, Swedes like to speculate who the actual assassin was, still, after several decades.

Germany and France like to sell things to other countries. They also like to receive food and other vital goods from other countries, so their people don't suffer from food boredom. In order to combine these benefits the EU was created. So countries can make a good deal and trade with each other. Mercedes and Renaults in exchange for olives and capers. Swedes also wanted to have olives (and a summer house in Spain) and were willing to trade in some of their flat-pack furniture and Volvos.

History of Sweden – in short

If we ever meet somewhere in Sweden and start talking about Swedish history, I expect you to remember those facts. ;)