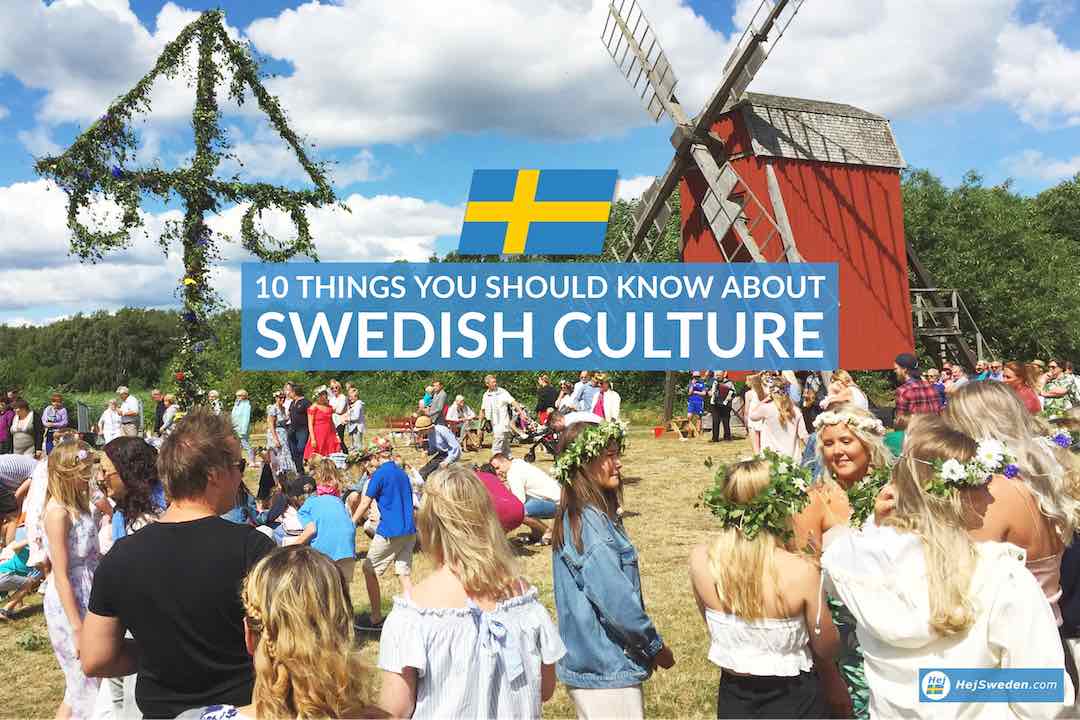 When you travel to a new country you might expect that the locals behave in a similar way to the people in your home country. Often times you will find yourself being surprised how different other cultures can be; the food, the music, the values and attitudes towards diverse aspects in life.

Next time you are in Sweden or spend some time with Swedes, you might want to know a little about their cultural differences, so you can avoid pitfalls and have a giving exchange without misunderstandings.

Here are ten aspects of the Swedish culture I believe you should be aware of in order to better understand life in Sweden and Swedish peoples' behaviour:

Swedes not only sing in the shower or in a choir. They also love to sing together with their friends and family during family gatherings and events like midsummer, the crayfish-party and Christmas. Snapsvisor (drinking songs) are very popular at any party or celebration. The most popular is Helan går.
More about Swedish traditions

Most Swedes hate conflicts. So much so, they collectively decided to avoid partaking in wars for more than 200 years.

World war I: “Nah, not interested.”
World war II: “Not sure which side to join. So we better pass that one as well. Conflicts suck!”

Swedes prefer having internal conflicts over external. They rather go away from a tense situation thinking about what they “wished they had said or done” instead of actually saying something that could potentially elevate a conflict.

More about conflict avoidance in Sweden

Swedes are a progressive bunch of people

Swedes like to strive for things that are new and modern. Whether that's fashion, tech, societal norms or nutrition trends. They are aware of global trends and quickly adjust to progress. They not only use to have the latest technological devices, they even know how to correctly apply them.
Reason: no one wants to be seen as outdated or lacking behind trends. If everyone is going for the new, so better you should, too. Being seen as bakåtsträvande (striving backwards) is what Swedes try to avoid. Instead, nytänkande (“new thinking”) is the way to go in Sweden.

Swedes find it difficult to receive a favour

Say, you're in a pub with a new Swedish friend and invite him or her for a drink. First, the Swede will politely offer to pay their drink themselves, then accept the invitation while making a mental note to invite you back next time you're making an order. Swedes have great memories, it can pass several months until the next visit at a bar and yet your Swedish buddy will remember they are in debt and insist to pay this time. Swedes simply don't like to feel like they are in debt with someone.

More about receiving a favour from a Swede

Swedes are individualists – but also not

Swedes believe in the freedom of the individual. While family is important, it often plays a lesser role in comparison to other countries. They strive to be oberoende, independent from others – not only financially but also socially.

At the same time, Swedes are a homogenous group of people. They very much care what their neighbours do and don't want to be more fancy than their class mates or colleagues. As I further explain in the next point…

Swedes (won't admit it, but they) strive to be just like their peers

Be yourself!
But only if “yourself” isn't any different from the people around you!

Sticka ut – sticking out – is not welcomed by your peers and will be punished with angry looks or social exclusion. “Du ska inte tro inte du är något bättre än någon annan!” (Don't think your better than anyone else!) is deeply rooted in the Swedish collective psyche and based on something called Jantelagen, the law of jante. Which you can read more about, here.

For example, Swedes like Zlatan Ibrahimovic (Swedish football player), but they secretly wish he would be “more Swedish”, because he “stickar ut” a little too much in the eyes of the modest Swedes.

You will notice this phenomenon not only how Swedes build and decorate their houses, but also when you see groups of friends walking down the street. At least two of them have either the same type of jacket, type of shoes or other fashion items in common.
By the way, in winter, Swedes collectively agree that wearing black is the only option to go for. Maybe grey if you push it. (More about Swedish fashion.)

Stockholm Marathon next year. Summer house in close proximity to a lake or coast. Top job. Round trip through the USA. A good dog. And of course becoming self-sufficient. Those and more are potential goals a Swede might go for in order to reach their desired levels of self-realisation.
What is your self-realisation goal? :)

To be financially independent from a spouse or any other person is valued highly in Sweden.
“Strong independent woman” is a phrase often heard when Swedish women describe themselves or other women.

Sweden is a secular country. Only about 19% of Swedes believe in God, The percentage of people in Sweden believing in supernatural phenomenas is higher.

Instead of getting drunk before raiding small villages along the coasts, these days Swedes prefer conquering the world by plane and on cruise ships. The moment a Swede leaves home turf is celebrated by opening a bottle of wine or beer or whatever beverage is preferred. By the time the captain welcomes the passengers, a typical Swede will be in a state of slight intoxication. This level will increase once they arrive at their target destination, whether that is Thailand, London, Berlin or Magaluf.

You might find it hard to believe that those calm, well-groomed Swedes are descends from wild Vikings – until you see them drunk.

Oh, and on the Finland cruise ship, the tour itself is the destination! No Swede who stepped on a Finland cruise ever really cared about discovering a harbour town in Finland. It's just a welcome opportunity to walk around, stretch your legs and recharge for more party-drinking on the way back.