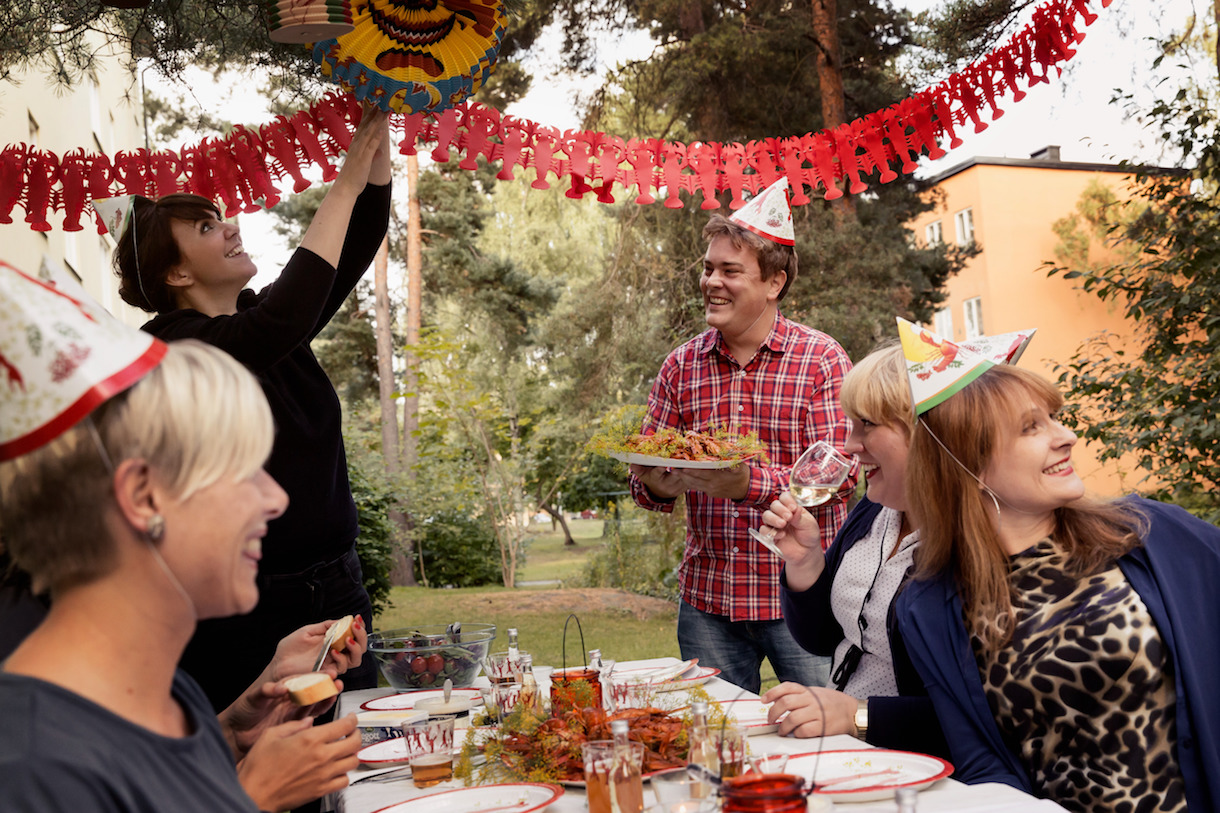 A long time ago, Swedes who loved to party, found the calm half year between midsummer and Christmas for too long, so they came up with the idea of squeezing in another party in the end of the ummer or early autumn: the crayfish party.

With the crayfish party, Swedes celebrate the end of the traditional annual ban on fishing for crustaceans between 1st of November and the first Wednesday in August. Since 1994 there is no ban anymore. No reason for Swedes to stop this beloved sticky-finger tradition.

How to celebrate a Swedish kräftskiva?

It's when Swedes gather, again in white tents, eating kräftor (crayfish), drink snaps and put on funny hats in the shapes of cones with colorful print. This time, the smörgåsbord also consists of bowls of crayfish, often unpeeled.

During a kräftskiva it appears very convenient not to be vegan or vegetarian. You're going to have to do plenty of manual work to get to your food, the kräftor, which have to be peeled of and then remove the bajsrand, which basically is the intestine of the crayfish, before you chew and enjoy it. Friendly Swedes will tell you to remove it. When I joined my first Kräftskiva, those around me unfortunately were not that nice. (The first time I was at a kräftskiva, my neighbor was not as nice.)

For a Swedish crayfish party, you need two things: napkins and patience

Then, suck the salty juice and soul out of the kräfta, before eating it. Don't forget to use many napkins, to remove the smelly sauce from your hands and shirt. After a three or four crayfish you will probably consider eating more potatoes more appealing, because you either got fed up with the taste or the extensive peeling process for a tiny little snack. Enough tradition.

To get rid of the taste, if you happen to not like it, drink more snaps. Swedes do the same, even if they like the taste of kräftor.

The day after a kräftskiva, Swedes tend feel a bit bad in the stomach, but instead of blaming the countless snaps-shots, they say “jag tål inte kräftor”, “I ‘react' to crayfish”.

More about Swedish culture & quirks, read “How to be Swedish – A Quick Guide to Swedishness – in 55 Steps”, here on Amazon

Have you been on a crayfish party? What are your experiences? Did your neighbor tell you to remove the bajsrand? Please comment belew!