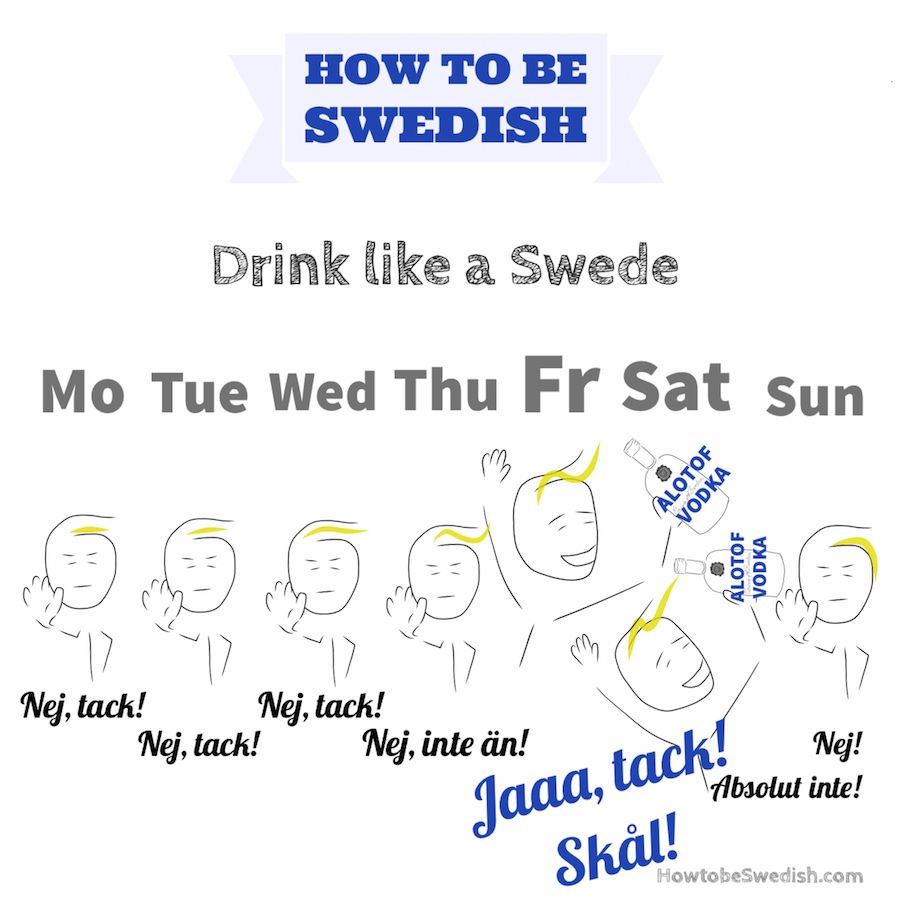 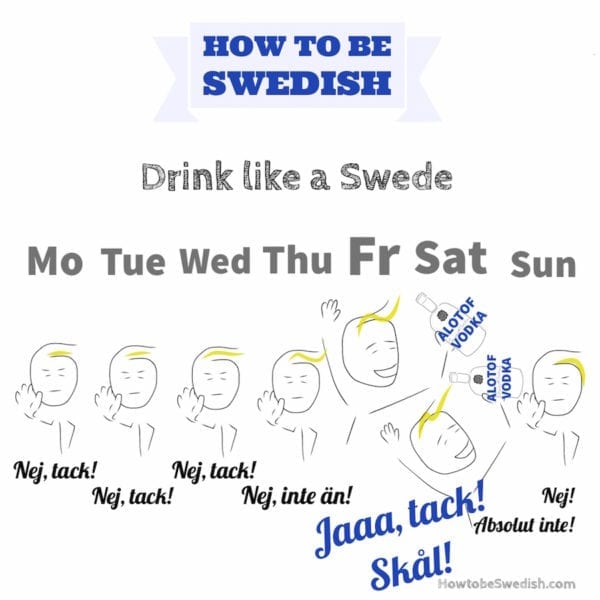 Swedes are like a bottle of vodka: from the outside they look unexcited, calm, pure like water, colorless. But once they open up…
… you will probably detect a slight smell alcohol.

In order to get hydrated everyone has to drink water. In the eyes or rather the mouths of some people, water tastes a bit boring. Which is why they might prefer to get their body hydration through milk, soda or juice. Swedes on the other hand find milk, soda and juice a bit boring, because those drinks don't take them any closer to a state of tipsiness or even drunkenness. And drunkenness is what Swedes aim for – at least on the weekends.

Many, many years ago, workers in mine- and forrest workers were partly paid in brännvin, spirits. Alcoholism became an increasing problem. Thus the sales of alcohol were strongly regulated by the government. Until today the sale of alcohol more than 3,5% is only allowed in Systembolaget, the state-owned alcohol monopoly. Of course you can buy Vodka and other alcoholic beverages in restaurants, pubs and night clubs, but for home consumption you have to go to Systemet, as Swedes colloquially call it. Alternatively, you fuel your kombi, estate wagon, and ask a good friend to join you for a little trip to Germany.

Recommended book about Sweden and Swedish culture:
“How to be Swedish: A Quick Guide to Swedishness – In 55 Steps”
now on Amazon

Alcohol is expensive in Sweden. For example, a bottle of Absolut Vodka, 0,7 l, costs about 25 Euro. That's half the price of what you pay in Germany. Reason enough for many Swedes to drive through Denmark and take the ferry to a German Bordershop.

More than 60% of the alcohol price in Sweden is tax.

… when the host puts several bottles of spirits and wine on the table and tells the Swedish guests they can take as much as they want.

All Swedes are alcoholics? Certainly not. Only 4,4% of them are

Swedes have an ambivalent relationship towards alcohol. On one hand they condemn it and its potential destructive effects on health and families. On the other hand many Swedes enjoy getting drunk a few times per month.

It's common to see drunk people on late evenings in the city centers. Swedes don't look down at those people. Being drunk at certain times is accepted through all classes in Sweden.

When to drink in Sweden

It's not ok to drink during the week, before workdays, say Monday to Thursday and Sundays. Maybe a beer or  a wine in the evening is okej, but you should certainly not do that every day unless you don't mind your colleagues suspecting you to be a smyg alcoholist, silent alcoholic.

Then, on a Friday or Saturday evening it's totally fine to drink and get drunk. As much as you want.

Usually it's not only accepted to drink when you go out and meet friends on a preparty. You might even get some comments if you chose to party without having a drink: Vad?! Ska du inte dricka ikväll? What?! You're not going to drink tonight?! … is something you're likely to hear from a friend who sees you drinking out of a small soda bottle that does NOT smell like you blended it with alcohol.

Words from a Swede:

Of course one can have fun without being drunk. But it's stupid to miss the chance.

Two sides of a Swede; sober and drunk

The Swedes you meet on a daily basis often show a completely different side of themselves in comparison to being drunk. Not necessarily in a bad way. The normally so shy and distant seeming Swedes suddenly dare raising their voices, express conflicting opinions and start using extrovert body language under the influence of alcohol.

The state of being drunk is not considered an unpleasant side effect, but rather a goal. A state that releases them from restrictions and allowing them to show their real (drunk) self. It is accepted to shout out your favorite song at night, to hit on that attractive person from your old work who you coincidentally meet at a bar or send a fylle sms, drunk sms, to your ex saying you miss those great moments you had together.

All this is of course not possible when being sober and would cause a strong feeling of shame. However, once being sober after a night of heavy drinking, Swedes feel fylleångest, anxiety from having done embarrassing things last night.

If you ever do something embarrassing in Sweden, no problem, your Swedish friends won't blame you – as long as you can blame it on the alcohol.

Invitations to a party or paintball shooting next weekend shall be taken not too seriously when the Swede who you just met is obviously drunk. They mean well. But don't ask that person the next day, once they have sobered up, where you are going to meet. Instead let them come back to you to show you that they also mean it in their “sober self”. In that case you'll get an invite via sms or messenger. So don't be disappointed if you don't receive anything. You don't have to save the date in the calendar right away.

If you see someone on the street who you had a great conversation with last weekend in the pub, don't expect them to stop and have a conversation with you, not even small talk, or actually, even a simple “hello”. Even eye contact is rare if you meet a Swede you have previously met in a drunk state. This doesn't mean that next time you meet the Swede again in the pub he or she won't recognize you. Probably the exactly same person comes to you with open arms hugging you, saying Tjjeeeenare, my friend! How is it going?!

Being sober on a Swedish party

Drunk Swedes are afraid to make a fool of themselves if a sober person is around. Sober people are not considered social when going out, and not welcome either – unless you say to the drunk person that you’re going to drive him or her home later – than it's accepted to stay as much sober as you want.

Swedes are very restrictive when it comes to alcohol and driving. Don't even start calculating “I'll just have half a glass of wine and I'll be fine.” Among Swedes you better drink absolutely nothing if you are going to drive your car later that night.

So, dear new-Swede, join the queue at Systembolaget next Friday afternoon and feel free to get drunk on the weekend – but only then!

Read “How to be Swedish: A Quick Guide to Swedishness – In 55 Steps”

What are your experiences with alcohol and drinking in Sweden? Please comment below!

1 thought on “Swedish Drinking Culture – Drink (Alcohol) Like a Swede”