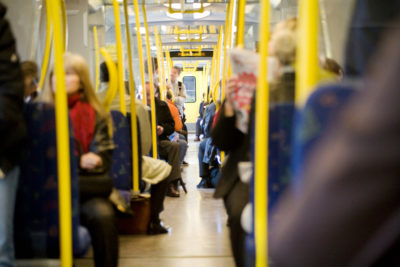 Yes, Swedes may come along as shy. Whether in the subway or in the bus, in Sweden you will notice it's rare that two foreign Swedes sit next to each other as long as at least one double seat is unoccupied. Swedes really don't like to be close to strangers or even have eye-contact with them, certainly not on their way to work. This is just one example of when Swedes may come along as distant or even unsocial.

But don't mistake this behavior as impoliteness. What's regularly perceived as coldness, is often a way Swedes behave to avoid bothering others. “I don't want to interfere with your stuff. And I will take care of my own.”

Swedes take care of their own agenda. They don't want others to comment on it. They will also not comment on yours. It's your life. They respect your personal integrity.

So you, as a new-Swede, shouldn't just sit down next to a Swede in any public transport and start telling them your life story or ask them where they're heading to.

As we learned in a previous post, start talking about the weather would be a good start into a conversation in case you simply can't keep your mouth shut. But even then you'll probably be perceived as a weirdo. Sorry, but it's true.

Sweden didn't start or join any war for more than 200 years. It's a war-free country since 1814. Pretty cool, heh. Look at that fellow Germans or Americans or, well, most other nations on this planet.

Swedes hate wars so much, they even send some of their own people to other conflict countries to tell them about the benefits of not having war. Those diplomats have reached international success and recognition. And when you speak with Swedes about politics (which is unlikely to happen, unless your a politician) you will see a shine in their eyes when you mention names like Dag Hammarsköld or … erm, well, I haven't talked so much about politics since I moved to Sweden…

For many years, a way for Sweden to stay out of conflict has been to remain alliansfri, free from alliances, alliances like the NATO. They also considered investments into a strong defense unnecessary. Why arms if there's no one to shoot at?! Now that the political world climate has gotten a bit rougher, Swedes decided it might be good to join the side that appears to be stronger – it's a political path they already successfully went on in the past.

This is their interpretation of alliansfrihet, and it already worked in the beginning of the 2nd world war, when Germany was busy invading most of its surrounding countries. Back then Sweden made a pact with Nazi Germany, saying, “Please don't invade us, you can use our railways for free if you want to, okej?” Back in the days Germans didn't fancy excessive amounts of wood or outdoor camping (yet), so they were satisfied with the railway option. Being able to pass Sweden by train was convenient for all German soldiers who otherwise would have gotten seasick on the ferry to oil-rich Norway.

Although Swedes have been strictly sticking to their “free from alliances” policy, political discussions about joining Nato rise up as regular as foreign airplanes in Swedish airspace or submarines in Stockholm's archipelago.

On a personal level, you will also have to get used to conflict avoiding and consensus seeking Swedish friends. Whereas your old friends back home will probably tell you when you're doing something wrong, your new Swedish friends rather remain silent and avoid any uncomfortable dispute until the problem goes away by itself.

Swedes try to avoid expressing conflicting opinions. When Swedes are angry, you will hardly recognize it. They make almost exactly the same facial expression when they are in an angry mood as when they’ve just won the lottery.

When they feel they have to express something that could be perceived as conflicting, they skillfully wrap it in soft words and phrases. For example, if you have to agree on a common side dish together, you might say “I want potatoes”. After you have said that, a Swede who might hate potatoes but wants rice instead, much likely replies. “Jag skulle kunna tänka mig att det hade varit gott om vi provade något nytt istället, som ris till exempel. Vad tycker du?” “I can imagine that it would have been delicious, if we tried something new instead, like rice for example. What do you think?”, which is the Swedish verion of: “I prefer rice.”

Shouting Swedes are rarely heard in the public as well. Pass by a construction sight or walk through the main shopping street of any Swedish city. No one screams or shouts.  To hear them raise their voices, you have to go to a football match or into a night club.

Don’t be spontaneous: Never just go to your neighbor, even if he or she is a close friend, without calling or booking a time in advance. Again, this seems shy and cold. But they really just don't want to disturb you when you're doing your thing. Whatever that thing is.

When you wait for the bus – do it in respectable distance to your waiting neighbor – at least two meters – make sure not to cough in autumn – people will think you have influenza and treat you like an outlaw. On the other hand, you can be sure no one will sit in close to you. So, actually yes, do cough if you need space.

To make 100% sure no one is going to sit on the place next to you, place your umbrella or bag, or gloves there. Or simply try to not look like you care about body hygiene.

If you hear loud-speaking people in the public, they are either non-Swedish or drunk. Rarely both.

Another way to avoid conflicts is to not act in a brash way, but instead trying to display oneself as being humble. Swedes are humble people, most of them can even be considered as reasonable. Because Swedes can make reasonable economic choices. Choices that usually involve decisions against lyxköp, buying unnecessary luxury goods. This is because in Sweden no one wants to sticka ut, stick out, be extraordinary, show off.

If you're really great at something, don't tell! It's almost like, all Swedes Swedes compete in “Who's the best in showing they're not”.

To learn more about Swedish culture, here a link to my book “How to be Swedish” on Amazon. Or read one of the following articles: …