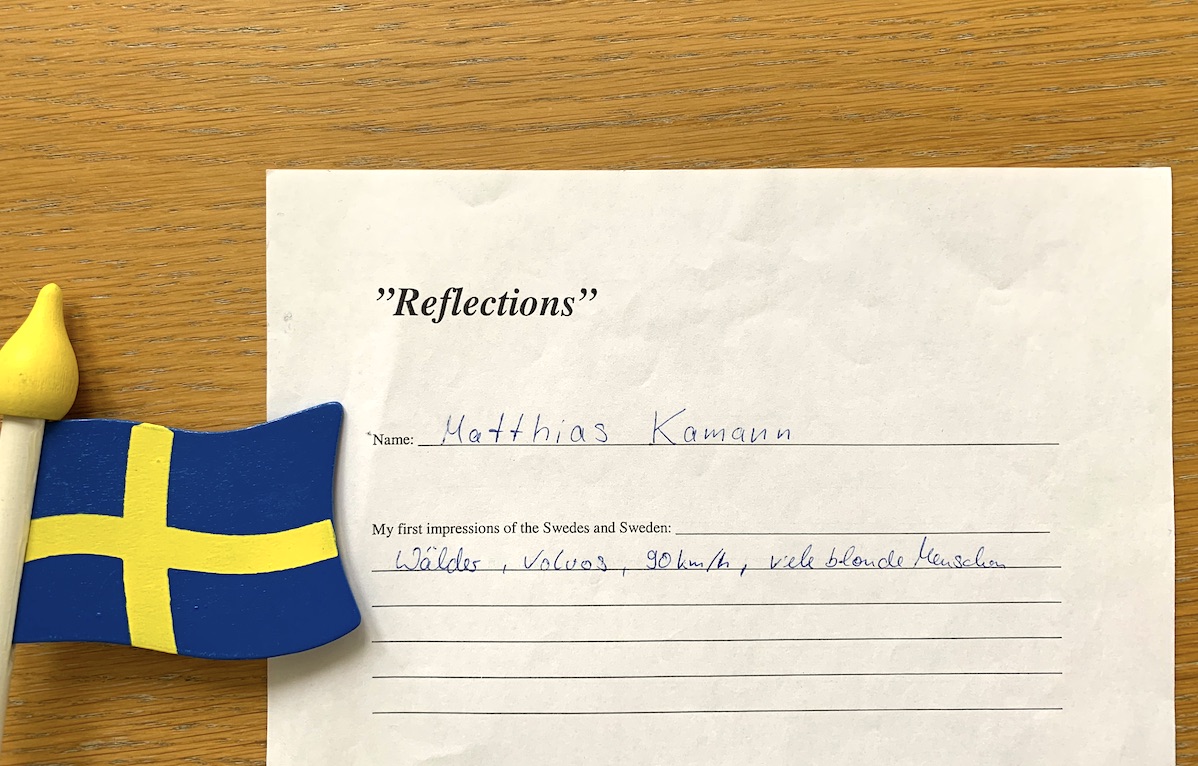 Imagine you go to a country to which you've never been before. A place far away. You have certain images in your head about how it looks and feels like to be in this country. But you're not sure whether these images and stereotypes will be confirmed, once you experience what it feels like to living in a new country.

Back in August 2005, I went to Sweden for the first time. My semester abroad. I was excited and nervous, because I had never been to Sweden before and no clue what would expect me. Of course I listened carefully to what friends who had been there before told me about the unique aspects of Sweden and the Swedes, but … you never know how your individual experience will be like until you have actually made the big step and discovered a new place with your own eyes.

As many other Sweden visitors, my Sweden image was influenced by the images from Swedish TV productions like Pippi Longstocking or Emil of Lönneberga. But also the TV reports about the country's progressiveness and its state of advanced societal development. But would it turn out to be as idyllic and modern as it was described by media and the people who had been there before?

I went to Sweden by car, crossing the Öresund bridge, which connects the Danish capital Copenhagen with Sweden's third biggest city Malmö, in the very south of Sweden. This already was a great experience, driving over Öresund bridge offers a beautiful view over the sea and shoreline of Malmö and its surrounding areas. An impressive welcoming to Sweden.

Having just passed the border control, I noticed that the street signs were a bit different than what I was used to in Germany, my “old” home country. In Sweden speed signs have a yellow rather than white background. Also the white lines on the asphalt were drawn in a different way.

And on the street, looots of Volvos and Saabs. But particularly Volvos. And everyone was driving roughly the same speed, of around the legal 90 km/h on the country roads. Almost no one was speeding, and when someone dared doing so, then clearly less than 20 km/h over the legal speed limit.

Then, on country roads, there was a weird type of second lane on the right of the main lane. I first wasn't sure whether those were for pedestrians or cyklists. I quickly found out that whenever truck drivers noticed I was driving behind them, they went over to the right on that special lane, to give me the chance to pass more easily. Never experienced that before.

Also, on highways and certain country roads, the opposing traffic is separated by a”vajerräcke“, a wire fence, instead of guard rails. This looks unsafe, but it actually works quite well, and is cheaper to build and maintain then concrete or fixed metal systems. At last Sweden is a vast country with low population density.

Along Swedish highways and roads, you see beautiful nature. Nature and more nature. A lot of nature. In the very south, you see fields and softly shaped hills. But as soon as you leave the county Skåne (Scania) and drive into region Småland, you notice that the forest gets more dense and the fields smaller. And you pass more and more lakes. I fell in love those idyllic lake views with rocks raising from the water surface and tiny islands that invite you to to rest your eye on for a second. (I imagine how it would feel to stand on one of them or have a little cabin on one of those micro islands.)

Before coming to Sweden, I thought those red and white wooden houses are rare and that they mostly became a symbol of the old days, used in movies. But, I was wrong. There are typical Swedish houses in typical “faluröd” Falu red color, here and there and everywhere. Very, very pretty!

And “moose signs”. Are there really that many moose? Are they dangerous? Yes, and Swedes, unlike Sweden tourists, really want to avoid seeing moose on the side of the road. The sight of “moose warning signs” on country roads and high ways are very common in Sweden.

Having arrived at my destination, Växjö University, I noticed that the amount of people with blond hair was relatively high. And, honestly, I have to admit, not too bad looking on top of that.

So, which Sweden stereotypes have been confirmed?

During the University arrival days, me and the other exchange students were asked to fill in a questionnaire, which we got back in the end of our semester abroad. This is what I wrote:

“My first impression of the Swedes and Sweden:
Forests, Volvos, 90km/h, lots of blonde people“

For more about Swedish culture …