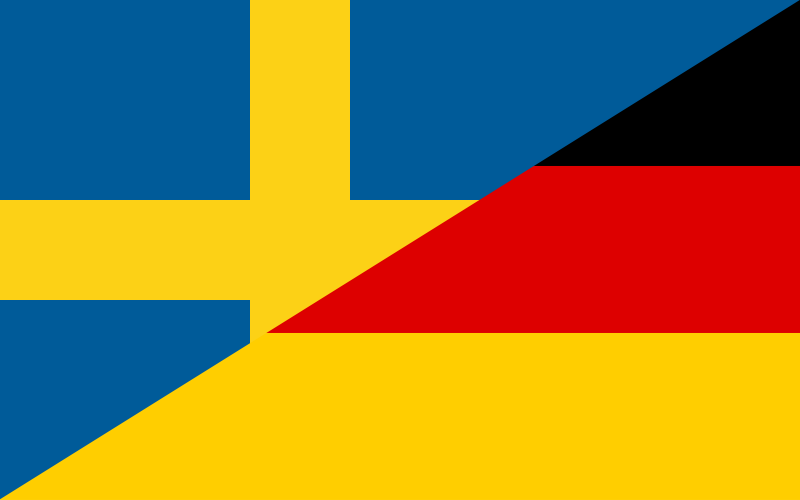 This post is written by a German who also happens to be Swedish.

Are there actually any differences between Swedes and Germans?

But aren't these nations at least culturally very similar? No!

Well, except, both consume lots of dairy products and celebrate Christmas. But even that in slightly different ways. For example: Germans don't watch Donald Duck each Christmas eve at 3 p.m. whereas Swedes altogether do.

To understand a few more differences you (even if you're a German or Swede) can use this list when you talk to a countryman from one of these nations while you are in a pub, drunk and in desperate need to talk about cultural differences.

So, here is a selection of examples where Germans and Germany is different from Swedes and Sweden – and vice versa:

Differences between Germans and Swedes

Germans drink some wine or beer here and there. Many of them don't even mind having a glass of beer or wine every day.
Prost!

Swedes consider this kind of drinking behavior as alcoholism. Which is why they drink pretty much nothing during the week, but do their best to compensate that with an overconsumption of alcohol during the weekends.
Skål!

More about this topic: “Swedes and alcohol – about drinking in Sweden”, here

Germans use a “normal” knife to spread butter on a slice of bread.

Swedes have come up with a genius idea. They invented the smörkniv, a wooden butter knife, whose sole purpose is to spread butter on things. (Why is it genius? Errrm. Let's hope some reader of this post has already explained this in the comments below.)

Germans like to “know better”. They tend to brag about when they are better informed about something than you are. This trait makes them so called Besserwisser, literally translated: better knowers.

Swedes however, try to avoid any conflict. Even when they “know better” than you, they often just nod over what you have to say, with a smile, and go back to work.

Germans can buy alcohol any time of the day, as long as they have access to a gas station. Even during daytime they can get alcohol in the supermarket and Toys'R'us.

Swedes have to go to one of the stores of their state-owned Systembolaget, the only place they get anything that contains more than 3,5% of alcohol, if they want to get some drinks for home consumption.
(No, of course you can't buy alcohol at Toys'R'us – but if you're a German you probably don't read this anyways because you already scrolled down to leave a critical besserwisser-comment.)

Germans make jokes about the Dutch.

Swedes can talk for hours about their glorious team in the world cup of '94 – where they got third. Yayy.

Germans have done major contributions to the initiation and continuation of a world war, it was 1914 and it was simply called World War (back in the days). A sequel was launched in 1939, titled “Worl War II”. Both turned out bad, not only for Germans but for whole mankind.

Swedes on the other hand have been less ambitious when it comes to starting a war or even participating in one. For more than 200 years (!) they stayed in their red wooden houses, thinking, “njää, let the others do.”

Alright, I acknowledge, the point above might have been a bit of a downer. So, let's continue with something a bit less serious – like diseases.

Germans try to avoid getting the Grippe, a simple cold that is cured within a few days.

Swedes panic when they hear someone saying “I just had magsjuka“, stomach flu.

Germans take Aspirin whenever they have a headache.

Swedes take Alvedon or Ipren whenever they (believe they) have any kind of illness. This is mostly due to the fact that it's exactly what nurses and doctors recommend them to do after contacting Swedish health care. “If Alvedon or Ipren didn't help, please call us again in four weeks, and we will tell you to call us in four weeks again…”

And here is one more difference between Swedes and Germans

Let's get outdoor!
Germans feel vulnerable to the forces of nature whenever they find themselves within a few meters proximity to natural objects, like trees or gras. To protect themselves from the dangers of “outdoor-life” they wear outdoor jackets. Cocooned in these jackets, German bodies are less likely to be effected by health threatening phenomenas like wind or rain, and thereby – logic – counteract catching a Grippe (flu).

Swedes base the decision whether they should wear more than just a shirt on the simple question: Does the sun shine, or not? No matter what temperature.