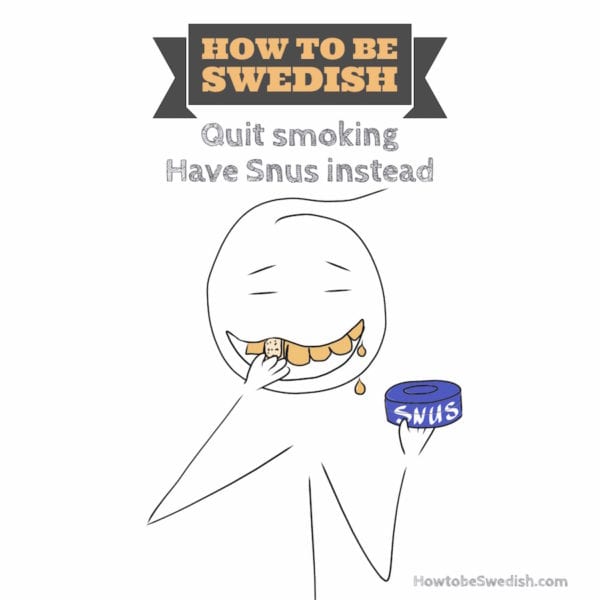 People in countries from all over the world have addictions. Most of them are legal. Some eat smelly Cheese (Salut French), others smoke marihuana (looking at you Dutchies). Swedes on the other hand are addicted to something else…

You might have noticed that some Swedes carry along a little round container in their pockets. It has roughly the size of an ice hockey puck or candy tin. What it contains is nothing sweet, but for many Swedes something that's as much desirable as candy: snus

Snus is Swedish for ‘snuff' or ‘smokeless tobacco'.

Swedes either put the tobacco loosely portioned in the mouth or, if they don't want look around like a drooling dog while talking, insert small white pillows that look like tiny tea-bags.

Snus is actually forbidden to be sold in most EU-countries, but Sweden successfully received some extra selling-privileges due to heavy lobbying in Brussels.

An argument pro snus might have been: “If we stop selling snus in Sweden, people will smoke more, therefore they have to go out in the cold. Therefore they have to leave their desks during working hours. Therefore we loose 1 billion Swedish crowns per year in GNP. The exact 1 billion we'll request from the EU to be subsidized. Do you EU-parliamentarians want that?!” Problem solved. Snus sales legalized.

Roughly one in four Swedish men consume snus regularly. In average 3,5 tins per week. It's more common than smoking, which about 14% of the Swedish people shorten their life-expectancy with.

It's totally common that a Swede – in the middle of a conversation – puts an indication finger into the mouth to remove a snus-bag and either puts it in an extra compartment for used snus-pillows in the middle of the tin or just drops it on the street. The latter disposal option is not recommended though.

Snus is also the reason why so many Swedes talk a bit weird. A snus-bag prevents their upper lip from moving freely. A good excuse for Swedes to speak even less than they normally do.

To round things up, being addicted to snus has a few advantages (over being a smoker)